Weather Watch: Seven of the Snowiest Cities in the U.S. 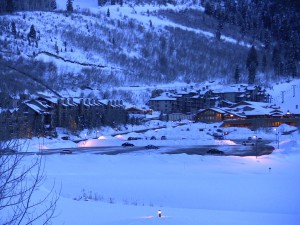 It’s only September, but plenty of folks have already had to pull out their snow shovels, reminding us that winter is just around the corner and begging the question: where will the heaviest snow blankets fall this season?

Our money is on these seven towns, which consistently rank among the snowiest cities every year.

Park City, Utah
Average annual snowfall: 411.1 inches
The home to the Sundance Film Festival and U.S. Olympic Ski Team usually sees more snow each year than anywhere else in the country. Known around the world for its silver mines in the late 1800s, Park City began to take advantage of another natural resource—snow—in the 1900s, transforming itself into a ski lover’s paradise by the 1960s.

South Lake Tahoe, California
Average annual snowfall: 407.4 inches
Nestled in the gorgeous Sierra Nevada on the southern shore of Lake Tahoe, South Lake Tahoe reigns as one of the American West’s premier ski destinations. Snowcapped mountains hug the pine-tree-lined shores, creating some of the most breathtaking vistas in the country.

South Fork, Colorado
Average annual snowfall: 392.1 inches
A timber-milling and silver-mining community originally founded in 1882, South Fork didn’t officially become a town until almost 100 years later, in 1992. Before the arrival of the railroad, South Fork existed as a key stage coach stop, utilized in great part by the Barlow and Sanderson Stage Company, who built early roads, some of which still wind through the area’s valleys.

Valdez, Alaska
Average annual snowfall: 326.3 inches
One of the busiest ports in Alaska, this town revolves around fishing—commercial and sport—and is also a key loading dock for oil companies. Extremely isolated until the 1899 construction of the Richardson Highway connecting the city to Alaska’s interior, Valdez is surrounded by the Chugach Mountains, which are made up of mostly glaciated rock.

Randolph, New Hampshire
Average annual snowfall: 281.2 inches
Incorporated in 1824, this mountainous, tiny town boasts some of the best hiking in the country—snowy weather permitting. Bordered by thousands of forested acres and diverse wetlands, Randolph’s quiet beauty is tough to beat.

Stehekin, Washington
Average annual snowfall: 262.7 inches
The name “Stehekin” comes from a Native American word meaning “the way through,” but the town is a far cry from a convenient pitstop. Accessible only by horse, ferry, hiking, or tiny planes, the village with a population that hovers around 75 attracts skiers, hikers, and scores of photographers, who are all drawn to its untouched terrain.

Each year, more than 3,000 roofs collapse in the U.S. alone, and snow remains a leading cause.

Roof Monitor was created to help support these communities, populated by pioneers who live, work, and thrive in areas defined by extreme weather and incredible beauty.

Together, we can work to prevent the catastrophic loss of life and resources created by roof collapses. Let’s get started.

26 Responses to "Weather Watch: Seven of the Snowiest Cities in the U.S."